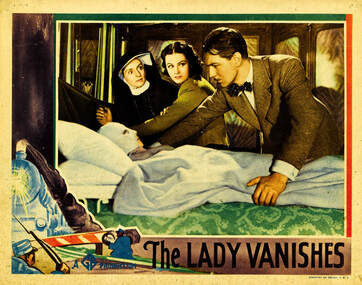 Announcing the Cast:
Kim Borowski as Iris Carr
Peg Sheaffer as Miss Froy
Luke Smetters as Max Hare
Jeff Ditzenberger - Mr Todhunter
Katy Dickson as "Mrs Todhunter"
Laurie Knoke as Evelyn Flood-Porter
Melissa Schnepper as Rose Flood-Porter
Gen Kundert as Mrs Barnes
Jerry Bredeson as Reverend Barnes
Amanda Walker as The Baroness
Greg Bettin as The Doctor
Chris Vestin as The Professor
Michelle Kister as Frau Kummer/The Nun
Chad Colvin as The Waiter
Anastasia Wolf-Flasch as The Border Official/Porter
Paul Casler as Alfred Hitchcock
Synopsis: The story takes place in the 1930's, in the time period between the World Wars. A young English woman, Iris Carr, meets the eccentric Miss Froy while traveling by train. Before boarding the train, Iris is overcome by heat stroke. Once on the train, Iris and Miss Froy become friends over a cup of tea, as Miss Froy tries to help Iris recover from her illness. After Iris awakens from a nap she finds that Miss Froy has mysteriously vanished from the moving train. Even more mysterious is that none of the other travelers on the train have any recollection of ever seeing Miss Froy! As Iris attempts to uncover the truth about what has happened to Miss Froy she begins to doubt her own sanity. The story is rich with the iconic characters commonly found in a Hitchcock film. Ethel Lina White was a vastly popular author in her day as well, with her writings often being compared to those of Agatha Christy. This classic tale of intrigue, deceit, crime and conspiracy is a sure winner for the mystery/thriller enthusiast!